Article Makes ALL Birth Parents Out to be Monster Abusive Stalkers

An article in the UK's Guardian about a TV news report may have disturbing consequences for parents who have lost children to adoption and open adoption.

The article is entitled "Adopted children face anguish as birth parents stalk them on Facebook" and states that birth parents "flout rules leading to 'intrusive and unplanned' contact." 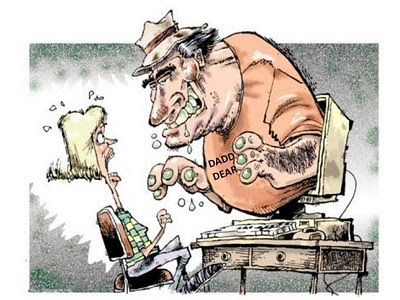 All incidents cited are of parents who had their rights terminated by the state and are claiming the charges were false. of course in each case the adoptive parents were told of brutal - never proven - allegations of horrendous abuse and they of course believe what they were told, true or false.

Voluntary relinquishments - with no accusations of abuse or neglect - are mentioned only to say that, in the UK:


"Where once adoption tended to involve a young, single woman giving up her unplanned baby, now two-thirds of adopted children have been removed because their parents abused or neglected them."

This figure seems absurdly incorrect as the majority of U.S. adoptions are in-family, step-parents adoptions (which also may or may not include some allegations of wrong doing)...and what about all the international adoptions?


The article goes on to state that as a result of numerous complaints from distraught adoptive parents, "local authorities are now advising adoptive parents not to include...photographs in their annual letters, in case these are posted online in an attempt to trace the child."

It seems in the UK, parents of children taken by the state - even after abuse charges - receive update letters and photos, a practice now being threatened.

As Etta Davis who shared this article points out, also of interest is the total lack of concern of the poor closeted birth parents - allegedly promised eternal protection of their lie - being found by their children online! Nor, of course does it indicate that any good and welcome reunions have resulted from adoption-separated parties finding one another on social networks such as Facebook.

Where's the "balance" in this report? Guess none is needed when you are maligning alleged child abusers, and after all, aren't we all?  Seems "balance" is only required when reporting negative things about the adoption industry. Then it is mandatory to state that "the majority of adoptions" turn out peachy...or the the majority of those who adopt are loving, caring people, who - for instance - would never send a son back on an airplane alone.  As if a report on prevention of a particular type of cancer and early treatments for it would have to state that the majority of people never get it.  These"balance" rules or norms seem very UNBALANCED in my experience.

Mirah, this link to the article isn't working. Looking forward to reading it.

Thanks for the heads up. Fixed it!

Wow. Birth parents STALK their children on Facebook. Some of us BIRTH parents were lied to and conned out of our children with lies and false promises (such as the OPEN adoption lie).

After all is said and done (and the adopters have their coveted prize, OUR children), we are painted out to be stalkers when we try to find and have a relationship with OUR children.

Why don't they post an article with the title "Adoptive Parents Who Lie To A Mother To Con Her Out Of Her Children are Despicable".

I won't hold my breath on that one.

I find it to be sickening how birth parents are defamed, dehumanized and degraded when the adoptive parents are always made out to be saints. This is the very reason young women should NEVER trust anyone and give her child up.

This is how you are seen years later, as a stalker when she only wants to know HER child.

I am from the era of closed adoption but I ditto with Vanessa said.

I struggle with my son's afamily. They have no compunction about punishing him because we have a good relationship.

The Guardian regularly posts one-sided, sensationalistic idiocy. And I don't say that easily, but I've seen many issues (including others close to my heart) blatantly misrepresented, even while they were telling their sources things completely opposite to their true intentions in the article framing. It's very irritating, but I would worry more about the article if it were *not* in the Guardian...

Have to agree with Vanessa. You don't see much if any media attention given to the abuse of mothers in adoption.