"Baby" Jessica in the News Again

In a very recent post - December 20 - I mentioned the "Baby" Lenore Scarpeta/DeMartino case that was so pivotal in my post-adoption journey. 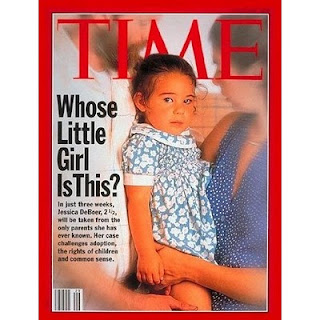 'She has never left my heart' DeBoer hopes to hear from Jessica, now Anna, who will be 18

Jan DeBoer is starting over.
Again.
The adoptive father of the child who became nationally known as Baby Jessica returned home to his Pittsfield Township apartment on Monday morning - the first time since a New Year's Day fire caused an estimated $550,000 in damage to eight apartments, including his.
DeBoer, 55, was in Florida caring for his parents when he learned about the fire. He flew back Monday, worried about what he would find.
His small one-bedroom apartment in the Greenway Park complex off Golfside Road was home to his few belongings - two guitars, his grandparents' Delft vases, his citizenship papers, a couch, a chair and a bed.
It also had his most-prized possession: An original painting of Jessica by a woman who was touched by the DeBoers' story and their battle to keep their adoptive child.
In 1991, DeBoer and his former wife, Roberta, began a lengthy custody battle that gained national attention after they adopted a newborn girl they named Jessica. The birth father didn't sign the adoption papers, and the two couples waged a court battle that reached the U.S. Supreme Court in 1993. Jessica was returned to her birth parents when she was 2-1/2 and was renamed Anna Schmidt.
The DeBoers later adopted a son, Casey, who is now nearly 15. Their marriage didn't survive the stress of losing Jessica, and although they remarried, they divorced again.
And so Jan lost his daughter, his marriage and his home.
He even lost the ability to play his beloved guitars in a Christian rock band after he mangled his thumb in a press at work in Printing Services at the University of Michigan.
After last week's fire, Roberta DeBoer placed the portrait of Jessica in the apartment complex office for safekeeping before Jan arrived Monday. But he was still nervous about what he would find.
The hallway walls were black. Insulation hung from the ceilings. The air was still acrid, four days after the fire.
When DeBoer saw the portrait, he was relieved.
"I look at it every day,'' he said of the painting of the big-eyed, curly-haired toddler. "She has never left my heart, and she never will. She will always be my little girl.''
Anna Schmidt turns 18 on Feb. 8, DeBoer said.
He hopes that milestone could prompt her to call, although he has no reason to expect it. He last saw photos and television news coverage of her about six years ago.
DeBoer said he's getting tired of starting over, but he's also thankful.
"I've got a good job, and people who love me are coming out of the woodwork to help me,'' he said. "There are more important things in life than stuff. I'm lucky Casey wasn't here, and we weren't sleeping.
"And I didn't have to jump off a balcony,'' he said, referring to tenants who were injured escaping the blaze.
Greenway Park is accepting donations of goods and money to help tenants. Donations may be dropped off at the office, 2756 Golfside Drive, south of Washtenaw Avenue.
The cause of the blaze remains under investigation, fire officials said Monday afternoon.
Susan Oppat can be reached at soppat@annarbornews.com or at 734-994-6679.


After all these years, how little has changed: The press still misreports stories of contested adoptions, calling this man the "adoptive father." He was a prospective adopter; recipient of a child not properly relinquished for adoption but who who, together with his wife fought to keep a child from her mother and father who wanted her and loved her.

Why is such a person painted with compassion and sympathy for his loss?

UPDATE: Anna is doing great. She's a high school senior, is actively involved in band (pep, marching, jazz, concert), loves photography, has good grades (3.0+), and has plans to attend college next year. She lives (in a middle class home) with her mother, Cara....step-father Lyal....and sister Chloe....and is very close to all. She has no contact with Dan Schmidt, her natural father, and hasn't had for 2-3 yrs now, for reasons you could probably guess. She also has no memory of the DeBoer's, nor does she ever plan to contact them. She felt it was "creepy" when she saw the recent article that said Jan DeBoer looked at her picture daily. She has led a full and normal life, and doesn't care to be in the public eye.
Posted by AdoptAuthor at 7:02 PM 130 comments: Links to this post

Before I wrote Stork Market and got involved with Origins-USA board of directors....I was a peace freak; old hippie...with a funky ole website: SilverDove.org

It was taken down while I concentrated on my publishing site. It’s been a real joy reviving it!

I hope you get half as much from reading the quotes as I have! It really centered me and brought me back to my spirituality and oneness...Gave me a great deal of pace and comfort...nice way to start the new year...

As the subject says: it’s a work in progress. I hope you’ll come back again when I upload the videos.

Without further ado, the site is: http://www.SilverDove.org