I used to think of adoption as putting together -- two parents coming together with a child to create a family. But when I had my children, I started to understand that adoption is also an undoing -- a mother being separated from her child. This “other side” of adoption is probably the reason I am so drawn to the Old Testament story of Hannah and Samuel.


The author of these words, Nicole, is a guest blogger at Real Life. Her post is entitled Hannah's Story: The Other Side of Adoption.

This is a beautifully written tale of a Vietnam "boat baby" complete with photos of infants transported in cardboard boxes aboard airplanes! Not to be missed!

The good news is that Nicole gives us a great ammunition against the bible toters pro-adoption rhetoric.

The sad news for Nicole is that she has only begun to "get it." She is on the brink, I believe. Of Hannah, Nicole writes:

As a mom, I read that and wonder if he looked at her with big eyes pleading with her to stay. I wonder if he wrapped his chubby, dimpled baby fingers around her hand as she placed him before Eli. I wonder if he cried when she was leaving. I want to know if anyone was there to comfort Hannah's precious toddler as she walked away. And I can't help but wonder how long before he realized she wasn't coming back.


Nicole - and those who tout that adoption is commanded by God - needs to go back to the bible and read the story of Moses in order to grasp the fact that adoption does not just involve a sacrifice for her, as an adoptee, to be grateful for.  The story of Moses, like that of Hannah, shows that mothers will only let another have their child out of the most utter desperate love for their child. 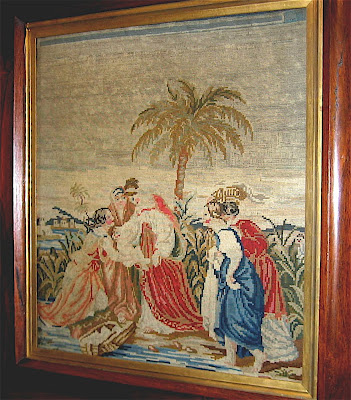 This antique tapestry, which belongs to Karen Lynn of Canadian Council of  Natural Mothers, depicts the Pharaoh's daughter and her handmaids at the water's edge as they find the baby Moses.

On the right hand side, hidden in the reeds... 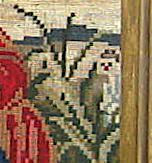 you will see a tiny face. This is Miriam, Moses' older sister who waited and watched as her brother was rescued from his basket in the river and decide to adopt him. Miriam then suggested that the princess take on a nurse for the child, and suggests Jochobed; as a result, Moses was raised to be familiar with his background as a Hebrew. (Exodus 2:1-10)


Jochobed kept her son hidden for at least three months and even after placing him to save his life, she continued on as his wet nurse. She had to look into his eyes and hand him over to another time after time after time...somewhat like mothers in open adoption today. And not unlike today's open adoptions, there came a time when that connection ended.

But the bible shows that however that the caring of another's child - an unrelated child - does not eradictae one's bloodline, one's kinship and heritage as American adoption attempts to do.


Though Jochobed is not mentioned again and we do not know if they reunited or not, or if he met his father. But Moses returns when he is 40 to free "his people" and lead them from slavery.
Posted by AdoptAuthor at 9:31 AM