The ten Baptist missionary Americans who were detained last week while trying to take 33 Haitian children out of the country were charged today with children and criminal association, a government official said. 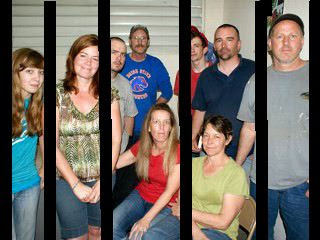 Information Minister Marie Laurence Lassegue's announcement came shortly after the five men and five women left a hearing at the prosecutor's office without divulging what had transpired.

"Clearly there are questions about procedure as to whether they had the appropriate paperwork to move the children," according to P.J. Crowley, a spokesman for the U.S. State Department,

The U.S. is reportedly leaving it up to Haiti to the dismay of the ten defendents who went to court with suitcases packed beleiving they'd be going home.

Meanwhile, CBS News reports there are serious questions about Laura Silsby's motives. The 40-year-old business woman, founder and CEO of PersonalShopper.com, who convinced members of Idaho's Central Valley Baptist Church to follow her dream of an orphanage in Haiti, has a troubling financial history.

She's been the subject of eight civil lawsuits, 14 for unpaid wages, Whitaker reports. Her Meridian, Idaho house is in foreclosure. She's had at least nine traffic citations in the last 12 years including four for failing to register or insure her car.  She can now add kidnapping to her resume.

This woman is “Executive Director and Founder” of “New Life Children Refuge,” a brand-new nonprofit organization which filed its incorporation papers with the state of Idaho just two months ago.

Her church allegedly stands by her.

Posted by AdoptAuthor at 1:07 PM