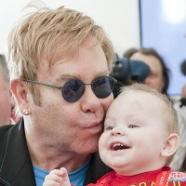 Elton John seems to want to follow in Madonna's footsteps in expecting royal treatment to sidestep rules because of his fame.

John is reportedly facing a legal battle over his dream to adopt a Ukrainian tot - because the country BANS gay couples from doing so.

The superstar - WHO IS SIXTY TWO - and partner David Furnish, 46, are also deemed TOO OLD under national laws which disallow adoption for those over 45.

Their only hope would be a presidential dispensation to take home 14-month-old Lev - after 62-year-old Elton declared at the weekend: "He has stolen my heart."

If Ukrainian President Viktor Yushchenko were to grant their wish the pair would have to adopt Lev's BROTHER as well. He too is in care - and Ukrainian law states siblings must be adopted together.

EveryChild, an international children's charity has raised the concern that the adoption could result in more youngsters being abandoned.

The organization said that while it praised John's help in raising awareness of the plight of children affected by HIV in Ukraine, it said the answer to the country's deepening HIV and Aids crisis does not lie in international adoption, arguing that more children may be abandoned in children's homes as a result of another high-profile, celebrity adoption.

EveryChild aslo reports that 95% of the children in Ukraine's institutions are not orphans and children born to HIV-positive mothers face particular discrimination. They are separated from their mothers and often end up in children's homes and institutions segregated from children not affected by HIV, it said.

"Research conducted in Ukraine by Liverpool University found that vulnerable mothers were encouraged by news of wealthy foreigners adopting from children's homes to place their own children in care in the hope that they would get a better life. Most children placed in children's homes are not adopted internationally; the majority face a bleak future.

"Children who grow up in a children's home are much more likely to end up in prison, involved with drugs and prostitution and go on to abandon their own children. The actions of celebrities like Madonna, and now possibly Elton John, could be actually increasing the number of children in children's homes in countries like Ukraine."

The Ukraine government has recently introduced new legislation that requires authorities to explore all possible options such as extended family and domestic adoption before a child is placed in a children's home, EveryChild said.

Superstars represent the very epitome of entitlement and set the bar for the rest. The wealthy from any means - other than showbiz - are right behind them and the upper-middle class trailing thereafter. Children are for these people just like any other commodity - cars, yachts, houses...they see one they like and they are accustomed to having it. They are not accustomed to being told no.

And so the game begins and we will see how far John is willing to go to obtain the little by who has "stolen his heart"? Will he, like Madonna, buy off an entire nation with a school or whatever? Can the Ukraine be bought?

Philosopher Damon Young writes: "When we see celebrities like Elton John planning adoption, it should prick us with this sharp reality: next to Ukraine, we're all Elton. We might not have his £75 million, but we've money, goods and chances most Ukrainians can't fathom." Young questions whether this is a good thing, without taking into consideration the trade off of material "things" for heritage and culture.

Will John take the higher ground and really her the very valid concerns of EveryChild and not simply ignore them as Madonna ignored similar concerns of human rights organizations in Africa? Seems these celebs should be balancing whether these decisions make them look good or not. if nothing else matters to them.But then, I guess when you're Elton John not even that matters. It's not like he's a new kid on the block building a reputation.

Interestingly, John sad that the death of a friend made him think more seriously about adoption - top replace his loss. Does it not concern him that this child will likely have to deal wth HIS demise sooner than a child should loose a parent?
Posted by AdoptAuthor at 5:40 AM