Daron and his 6-year-old brother were watching television Sunday when they found a gun in their home, police said. The elder brother fired the gun, hitting Daron in the back of the head, and he died a short time later at St. Joseph's Hospital in Paterson.

The gun belonged, illegally, to their adult brother, 23-year-old Jalik Jones, a convicted felon, who had moved back into her house, according to a report by the state's child services agency.

According to a report the state's Department of Children and Families released this week, Daron's mother, identified in news reports as Margaret Mayes, finalized the adoption of Daron and two other children at the end of October. They joined two of Mayes' biological children in the home. 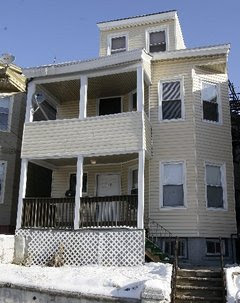 The report faults Mayes for not telling the Division of Youth and Family Services that Jones had moved back into the Patterson  NJ house, saying she "placed Daron and her other minor children at risk after violating her adoption agreement by not notifying DYFS another adult had moved in the home prior to Daron's adoption finalization."

Since the shooting, Mayes' other four children have been placed with a relative, according to the report. They include two girls aged 3 and 9, the 6-year-old boy and a 15-year-old boy.

Kate Bernyk, a spokeswoman for DYFS, said Thursday that prospective adoptive parents are required to list any other adults that live in their home so that the agency can interview them and conduct a background check.

Jones served about five months in state prison for theft this year and was released in July. It was not known when he moved into Mayes' house.

Bernyk said that because the adoption was finalized, Mayes has the same rights as a biological parent. She said even though the state removed the children after the shooting, DYFS would try to have the children placed back in the home.

"Our goal is always reunification," she said.  [What about reconciliation with their original families?]

Police have not charged Mayes. Several phone numbers listed under her name in Paterson were disconnected Thursday. It was not known if Jones had retained an attorney, and the Passaic County Prosecutor's Office did not return a phone message Thursday seeking comment.

Authorities have said Jones was not home at the time of the shooting.

And I'll bet ya' dollars to donuts these were all subsidized adoptions.
Posted by AdoptAuthor at 9:09 PM