Charges in the Kidnap and Adoption of Anyeli Liseth Hernandez Rodriguez

As you may recall, Timothy and Jennifer Monahan, of Kansas, have been ordered by the Guatemalan government to return the child they adopted. They have been stalling, and the US has failed to force the issue. 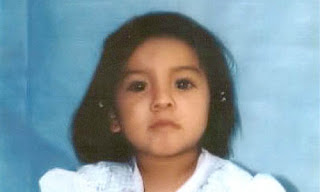 Anyelí Liseth Hernández Rodríguez, reported kidnapped in Guatemala in 2006,
was tracked to an orphanage, then to the US where she had been adopted.
After months of hiding from the press, the couple, have come forward on the CBS Early Show.

They are making claims of physical abuse, implying that her mother, Lyoda Rodriguez, is unfit to have her kidnapped child returned. An absurd claim since the child was in the hands of kidnappers for more than a year and likely was hurt by them.

The reason for this desperate act now?    The arrest of those involved in the kidnapping the Monahan's call "alleged":


(AP)  GUATEMALA CITY — A Guatemalan court sentenced two women to 16 and 21 years in prison on Monday for trafficking a stolen baby who was given for adoption to a U.S. family.

Special prosecutor Lorena Maldonado said the sentences handed down to a lawyer and the legal representative of an adoption agency will reinforce the birth mother's bid to get her daughter returned from the United States.

"Even though the criminal proceedings are separate from the adoption process, these sentences help, and confirm the argument of the mother, Loyda Rodriguez, that this girl is her daughter and was stolen from in front of her house, and that there is a criminal structure in Guatemala that steals children," said Maldonado.

A 16-year sentence went to the legal representative of the adoption agency, Enriqueta Noriega Cano, where the girl spent a year before being adopted. The girl left the country on Dec. 9, 2008.

Rodriguez, the mother, obtained a Guatemalan court order in July for the return of the seven-year-old, but it is unclear if it can be enforced.

The girl, Anyeli Liseth Hernandez Rodriguez was born Oct. 1, 2004, the second child of Rodriguez, a housewife, and her bricklayer husband, Dayner Orlando Hernandez. The girl disappeared Nov. 3, 2006, as Rodriguez was distracted while opening the door to their house in a working class suburb, San Miguel Petapa. She turned to see a woman whisk the girl, then two, away in a taxi.

If U.S. authorities intervene to return the child as the Guatemalan court has asked, it would be a first for any international adoption case, experts say.

In August, a construction-paper sign taped to the door of the girl's U.S. address, a two-story suburban Kansas City home, read: "Please respect our families (sic) privacy during this difficult and confusing time. We ask that you not trespass on our property for the sake of our children. Thank you."

Guatemala's quick adoptions once made this Central American nation of 13 million people a top source of children for the U.S., leading or ranking second only to China with about 4,000 adoptions a year. But the Guatemalan government suspended adoptions in late 2007 after widespread cases of fraud, including falsified paperwork, fake birth certificates and charges of baby theft — though they still allowed many already in process.

The International Commission Against Impunity in Guatemala, a U.N.-created agency prosecuting organized crime cases in Guatemala, has reviewed more than 3,000 adoptions completed or in process and found nearly 100 grave irregularities.

The U.S. still does not allow adoptions from Guatemala, though the State Department is currently assisting with 397 children whose adoptions were in process at the time of the ban.