Review of "One Small Sacrifice"

One Small Sacrifice is Trace DeMeyer's memoir about her adoption and search for her first family, and some history about the Indian Adoption Project. 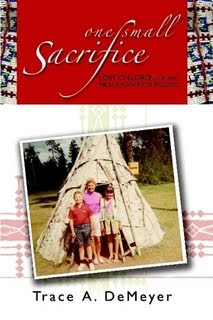 Thousands of Native American children were taken from their families and tribes in North America. The Civilization Fund Act was one of the first federal laws targeting Indian children. Passed by Congress in 1819, it authorized grants to private agencies, primarily churches, to establish programs to "civilize the Indian."

In the 1950's and 1960's the Indian Adoption Project placed hundreds of Native American children with white parents, the first national effort to place an entire child population transracially and transculturally.

Trace is part Indian. Her story is  - at once - heartfelt and sad, encouraging and discouraging. I admire her persistence. I grieve for her losses. I am angry about her separation from her people and I hope she finds more of her first family.

Secret adoptions had a purpose - to break up North American Indian families, to assimilate us, to tame dirty savages. What is known about the Indian Adoption Projects and the aftermath has been pretty much secret...Until now. An unforgettable narrative of an Native adoptee experience plus an expose on the billion dollar adoption industry still operating today. Read this book!


Trace A. DeMeyer is an award winning journalist who writes for News from Indian Country on the Lac Courte Oreilles Ojibwe Reservation. She co-founded Obijwe Akling in Wisconsin and she is the former editor of the Pequot Times in Conn.
Her ground-breaking memoir includes tribal representatives' testimony to the U.S. Senate in 1976 concerning the Indian Adoption Project.
__________
Have you read a book you'd like to share with others?  Send you review - or anything you'd like to GUEST BLOG about to me at: MRIben@AdvocatePublications,com
Posted by Mirah Riben at 12:23 PM