My dear Aussie colleague, Evelyn Robinson forwarded this to me:

The Royal Brisbane and Women’s Hospital has apologized for past practices in relation to adoption. It’s the first time a public apology has been made to birth mothers who were forced to place their babies for adoption, and about the treatment they endured. This is quite a significant event.


The apology is for the mistreatment of some of the group's members whilst patients there, last century was featured on AU Channel 7 featuring the President of ALAS along with some other mothers at the hospital yesterday morning. During the filming Professor Ian Jones admitted that the hospital ill treated and overly drugged unwed mothers whilst patients at the hospital. As far as we know this sets a precedent as it is the first time, to my knowledge, that there has been a public apology from an Institution and admittance of wrong doing. 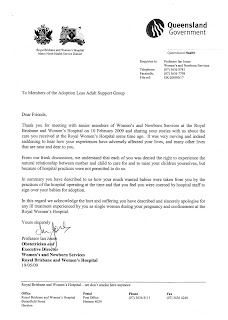 Posted by AdoptAuthor at 9:12 AM

May this be the start of many such apologies.

Spread this news far and wide.

I'm writing a letter about this to a local hospital that I know used to advertise for pregnant girls and women to give their babies up for adoption --- a Catholic Hospital at that.

Actually, this letter posted here shall be read by all Buffalo and Erie County Adoption Agencies as well. I will see to that.

I thought they got some kind of apology in Australia years ago. But I have not paid much attention so may be wrong. Maybe this is the first from a hospital, the other was something else?

The other apology was from the government of Australia to the aboriginal peoples who suffered the forced removal of their children to white foster homes and boarding schools. The children were scrubbed to become white, forced to forget their native language, not adopted, but just turned out into the streets at age 18.

See the Movie Rabbit Footed Fence. And look up folk singer Archie Roach on YouTube. His song "Took the Children Away" is powerful. Also, "Manjana". These are true stories.

I learned about this from Carol Anderson from CUB (rest in peace) around 1991.

You can look up "Australia says Sorry" on You Tube and "The Stolen Generation".

Thanks! Yes, I was aware that there was an apology in Australia about what was done to aboriginal people. Native Americans were treated similarly badly in the US. I will look up your links for the movie, I share your sentiments for Carole Anderson, may she rest in peace. We did not always agree but we were always friends. She died too soon.

I had thought there was some other apology to birthmothers in general in Australia or maybe New Zealand that some groups in the USA were basing their agenda of asking for government apologies upon.

"Chris, Trish Farrer and I [Dian Welfare] presented papers at the 5th Australian Conference on Adoption in 1994.. We made such an impact on a visiting social worker from the UK, he stood up at the forum to end the conference on day three, and publicly apologised to all mothers on behalf of his profession. The entire room seemed to sigh and let out a huge sob of relief.. Our first apology - at last." http://www.originsnsw.com/nswinquiry2/index.html

If we are counting verbal apologies, we in the U.S. got one from Annette Baran sometime in the 1980s.

There was an enquiry into past adoption practices a few years ago in the state of New South Wales, but I don't believe it was accompanied by an apology. Regards, Evelyn Robinson, South Australia

Thanks for all the answers. Guess I was mistaken in thinking there had been some formal government apology.

I was not thinking of verbal apologies by social workers. I suspect there are a few of those. I was there when Annette Baran first offered hers at an early AAC Conference, it was quite honest and refreshing to hear.

Thank you Eveleyn for clarifying.

MaryAnne, do you recall what year that was?

UPDATE: Evelyn Robinson has gotten lost pof media calls re this apology. She will be speaking on ABC - Australian radio:

There'll be lots of stories that emerge in conversations....from the crevices, family histories, lives and minds of people you know, in response to the topic of this week's program. So many women, and men, of a certain generation were affected. And still are.

These aren't skeletons in the closet, but living flesh and blood, shrouded in secrecy and taboo.

What happened to those thousands of women and girls who were made to relinquish their babies for adoption because they - sacre bleu! - weren't married? The Australian figures between the late 60s and early 70s for baby adoptions are staggering. What was the psychological toll on the birth mother, and how did the birth and the ghostly threads of maternal attachment occupy their minds and lives in the years and decades afterwards? What choices did they make? How did it affect their own development? Relationships? Sense of self? Expectations? Fears? What if they went on to have many children in response? Or none?

UPDATE: Federal Minister, Jenny Macklin said on Aussie TV yesterday that the government might be interested in a national enquiry into past adoption practices.

If you go to National News and then click on Adoption Inquiry, you should be able to watch the news clip.

After a long absense, I am back. Please see my recent post about this on my blog:
http://halforphan56.wordpress.com/2009/10/07/brisbane-hospital-apologizes-for-mistreating-mothers-and-their-newborns-who-were-taken-at-birth/

It is interesting to note that my new blog is attracting the attention of some progressive-minded men! Isn't that novel?!

Keep speaking out. The more we do, the more people we are educating.

Hi I couldnt find a email for you ? but I wanted to say that the link for the video of the apology goes to another blog instead
I am so glad that QLD hospital acknowldedged the trauma of seperating mother and infant and that their practices at the time were horrific.
Jane (Australia)