WARNING: The following may be offensive to some. My use of pro-life arguments is not meant to demean their original intent - only to show how they apply equally to argue against adoption and for family preservation.

I found this while shopping for an Adoption Sucks tee - which I didn't find!
It says: "Childbirth is an act of nature.
Adoption is an act of God" 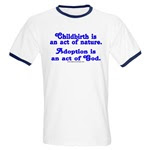 To thee I sayeth:

You formed my inmost being;
You knit me in my mother's womb.
I praise you, so wonderfully you made me;
Wonderful are your works!
Psalms 139:13-16 [New American]

YOU, God, knit me in my mother's womb! What do those words mean? How can anyone who believes in God, or who claims to, not believe that very creation of life and its coimng to fruition at birth are not within His domain? This "nature" and outside the realm of the Almighty? HUH? What bible are these people reading? The Gospel of NCFA?
To thee I sayeth:

Do Not Take God's Name in Vain!
If you believe in God, then you generally accept God as Omnipotent and Omniscient ruler of the universe, He therefore extends His providence to all things, overseeing them and maintaining them in a condition to fulfill His ultimate purpose. God therefore created the present world as a perfect place to fulfill His purpose, with all nature under His command. Nature is simply the law God established at the time of creation, which regulates the processes of this world in accordance with the principle of cause and effect.

Is not every flower, every rainbow, every baby not proof of God's existence, for those who believe n God? Are WE not all God's creations? Mad in his image? Or does that happen to babies only after they are adopted? If so...why aren't ALL babies adopted?

Stop this blasphemy! Next you'll be followers of the church of blasphemous Rosie O'Donnell who tells her adopted kid they were born in the "wrong tummy" but God saw his "mistake" and fixed it!

"Yahweh called me when I was in the womb, before my birth he had pronounced my name." Isaiah 49:1

Yet those who separate babies from their mothers and take away their names, have the audacity to call it God's plan!
We need to get back to basics and reality folks and remember the biblical references to adoption are all about maintaining family ties. Read up on Moses before ye use the word of God to justify BUYING BABIES!!

Clearly the Christian pro-life position is that life begins at conception. If all life is scared and it begins at conception - what then is the mother in who's womb it has been planted and grows? A mistake? Interestingly, some Christian pro-life arguments contain the belief that "We can compare the Spirit of Christ dwelling in us to the umbilical cord which connects the unborn baby to its mother. All the nutrients including oxygen to sustain life is furnished to the unborn child through the umbilical cord." How can anyone who believes and preaches this, stand in witness or support those who and physically take a child virtually form its mother's womb without recognizing that they are violating the intent and word of God.
A Catholic pro-life argument proclaims: "our nation has all but lost any claims we could have ever made on 'compassion' because we have allowed lies, innuendo and insanity to circumscribe the parameters of this so-called debate." Indeed we have when we justify baby selling as the will of God. "Denying the fact that life begins the moment a female egg is fertilized is sheer lunacy — or, worse, intentionally misleading....It is patently arrogant that we, as adults, get to decide for the most vulnerable of our society — our unborn children, who cannot speak for themselves..."

We need to press pro-lifers who promote adoption with this question:

If Killing an Unborn Baby is NOT a "Choice" - why is separating it from it's mother not just a choice - but a justified holier-than-thou preference for those who proudly wear their Christianity on their sleeve, and the Christian Coalition which promotes adoption and bemoans the decrease in the number of adoptions?

In Genesis (1:27-28), when God blessed man and woman and called them to "be fruitful and multiply" he did not stipulate that they needed to complete their education first, or be married or employed, or own their own home.
Let us not forget, and please let's revise, this oldie but goodie: 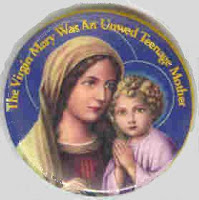 It reminds us that The Virgin Mary was an Unwed Teenage Mother!
And it was said to Mary: blessed is the fruit of your womb! Luke 1:39-44

So, just to keep things in proper perspective...I've decided to bring it back on a tee shirt: 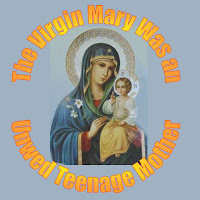 Posted by AdoptAuthor at 1:48 AM